The JUVE Awards Germany are considered one of the most important legal awards and are presented annually across several  categories, each category contains five nominees.
The award takes into account in particular the presence in important litigation, the support of high-profile clients in contract drafting and portfolio management, as well as the personnel development of the nominated law firm.

This year, awards were distributed in 18 categories – 15 for law firms and 3 for corporate legal departments.

This year’s recognition indicates the strong development and growth of our patent and soft IP practice across borders.

“Through their merger, the IP experts at Hoyng ROKH Monegier from across France, Germany and the Netherlands have written an unprecedented success story. The firm’s rise to the top has proven wrong those who thought that, due to client conflicts, its international offices would remain a series of loose associations. But Hoyng ROKH Monegier has focused strategically and thus created room to manoeuvre.

Regular clients such as Intel, Apple, Gilead and Philip Morris are entrusting the firm with their cross border litigation. And Hoyng ROKH Monegier has recently added more companies, such as Lenovo, to their client list. It also has a growing presence in trademark management and litigation. For example, the firm is representing Samsung with respect to its smart home umbrella brand at the European Court of Justice. It has also appointed a trademark litigator as a partner.”

It was a great award ceremony, that took place partly in person in Frankfurt’s beautiful old opera. On site were our Düsseldorf based partners Christina Tenbrock, Tobias Hessel, Stefan Richter and Mathis Breuer. Christina Tenbrock accepted the award on stage.

A big thank you to all our clients who trust our work and congratulations to the whole team for this special achievement! 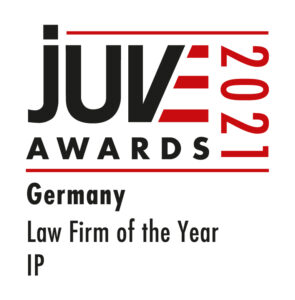 The Global IP Awards recognise the outstanding achievements of IP law and attorney firms in litigation, prosecution and transactional work during 2019. In total, 113 awards were awarded to firms from across the globe, highlighting the depth and spread of IP expertise available to corporate IP teams the world…
Lees meer